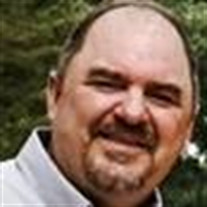 Adrian Eugene Ross, age 48, of Lynchburg, TN went to be with his Heavenly Father Saturday, October 9, 2021. He was born October 2, 1973, in Enid, Oklahoma to the late Franklin Ross and Linda (Baze) Ross who survives him. Adrian loved his family... View Obituary & Service Information

The family of Adrian Eugene Ross created this Life Tributes page to make it easy to share your memories.

Send flowers to the Ross family.