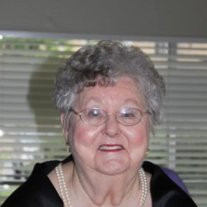 Mrs. Catherine L. Riddle Alonso, age 77, passed away Tuesday, May 14, 2013 at Life Care Center in Tullahoma. Funeral services will be held Thursday, May 16, 2013 at 7 PM at the Lynchburg Funeral Home Chapel with Rev. Tim Bender officiating. Visitation with the family will be Thursday from 5 PM till service time. A native of Winchester, Tennessee, she was the daughter of the late Riley and Susie Reavis Riddle. She retired from Worth in Tullahoma after working as a ball sewer. She was a member of Brownington Church of the Nazarene. She enjoyed quilting, cooking, ceramics and fishing. While a resident of Life Care Center she became a member of the Red Hat Society. In additions to her parents, she was preceded in death by her husband, Carl Alonso; one daughter, Mary Sue Holden and two brothers, Leon and James Riddle. Mrs. Alonso is survived by three sons, Clarence E. Cleek Jr. and his wife, Kathy of Winchester, Teddy Lynn Cleek and Randy Cleek, both of Lynchburg; one daughter, Gail Nelson and her husband, Doug of Lynchburg; four step-sons; two step-daughters; four brothers, Ralph Riddle of Winchester, Johnny Riddle and his wife, Barbara of Lynchburg, Billy Wayne Riddle and his wife, Patty of Winchester and Joe C. Riddle of Lynchburg; sixteen grandchildren and twenty-three great grandchildren. In lieu of flowers, the family has suggested donations be made to the Pennington Cemetery. Lynchburg Funeral Home is in charge of arrangements.

The family of Catherine L. Riddle Alonso created this Life Tributes page to make it easy to share your memories.

Send flowers to the Alonso family.