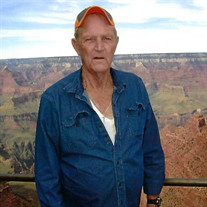 Charles William Baker Sr. Goodbyes are only for those who live with their eyes. Because for those who love with their heart and soul, there is no such thing as separation. - Rumi Charles William Baker Sr. of Tullahoma, Tennessee passed from this earthly life and into the loving arms of our Lord and Savior Jesus Christ, on Monday, July 15, 2019. He was 76 years old. He was born at his Bakertown home in Moore County, Tennessee on August 7, 1942 to the late Madge Walker and late Lannie Baker. On December 28, 2004, he married his best friend Mona Faye Chapman, who survives. He lived life to the fullest and made everyday count. He loved people and never met a stranger; rest assured, whenever speaking to him, he would always have something witty, comical, or sarcastical-funny to say. That was just Daddy. He was a well-known Master Mason for the majority of his life, but was probably more well-known for what he laid out in the kitchen, be it at his own home or at the Barrel House BBQ. He truly was a jack of all trades. He deeply loved all his family and his two dogs Patches and Peaches. He will be tremendously missed by all who loved and knew him. He is survived by his son, Chuck Baker of Lynchburg, TN, daughter, Jacqueline (Harry) Conway of Tullahoma, TN, daughter, Crystal (Cale) Thomas of Winchester, TN, daughter, Charsie Henley of McMinnville, TN, and daughter, Shannon Roberts of Lynchburg, TN, sister, Dorothy (Charles) Shelton of Winchester, TN, sister, Barbera Sisk of Fayetteville, TN, brother, James Walker of Tullahoma, TN, sister, Brenda (Jim) Ramsey of Flintville, TN, and sister, Debbie (Silvia) Walker of Tucson, AZ. Grandchildren - Adam, Ashley and Hannah Baker of Lynchburg, TN Tori Rogers, Destiny and Emma Grace Hill, all of Tullahoma, TN, Mason and Macie Lynn Vonwert of Tullahoma, TN, Haley and Michael Whitsell of Lynchburg, TN and Cody and Jesse Cates, Chris Gross, and Shawna Vaughn all of McMinnville, TN, numerous great-grandchildren, and numerous nieces and nephews. He is preceded in death by an infant son - Michael Eugene Baker, infant sister Emily Walker, step-brother Elbert Walker, and step-father Jim Walker. Funeral Services will be held Thursday July 18, 2019 at 2:00 pm with burial services to follow at Lois Cemetery. The family will receive friends on Wednesday evening, July 17, from 5pm-8pm at the Lynchburg Funeral Home, with Brother Mike Awalt officiating. In lieu of flowers or donations, we ask that you take a moment to hug the ones you love. Love them more fiercely, notice them, and leave no words unsaid. Tomorrow is not promised. For online guest registry please visit, www.lynchburgfuneralhome.com LYNCHBURG FUNERAL HOME IS IN CHARGE OF ARRANGEMENTS.

The family of Charles William Baker Sr. created this Life Tributes page to make it easy to share your memories.

Goodbyes are only for those who live...

Send flowers to the Baker family.