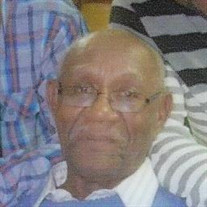 Mr. Evanglist Waggoner, Jr. passed this life on July 27, 2017 in Nashville, Tennessee at the age of 88. A resident of Lynchburg, he was born in Moore County, Tennessee to the late America Sally Dance and Evanglist Waggoner, Sr. on Dec. 23, 1928. A member of the Elm St. Church of Christ, he loved to fish, eat good food and was an avid New York Yankees fan. Prior to retiring he worked as a mason and also drove a bus for the Moore County School System. Other than his parents he was preceded in death by his wife Velma Eady Waggoner and brothers Howard and John Cole and Richard Waggoner. He is survived by his wife Jessie Webb Waggoner and son Michael Waggoner of Lynchburg along with daughters Ruth (Ter) Gomez of Greely, Colorado; Kathy (Kenneth) Dartis of Winchester, Tennessee; Shanna (Troy) Hord of Murfreesboro, Tennessee; and Joyce Ann Waggoner of Murfreesboro, Tennessee. Surviving step children are sons Curtis and Melvin Taylor of Dayton, Ohio and Gregory Maxwell also of Dayton, Ohio along with daughters Mary Ann Rutledge and Rita Maxwell of Dayton, Ohio and Lynda Maxwell Brown of Columbus, Ohio. Cousin John Dance of Fayetteville, Tennessee along with sister-in-law Jennie Cole of Shelbyville, Tennessee and special friends Coleman March of Lynchburg, Tennessee and Robert Montgomery of Fayetteville, Tennessee also survive. Twelve grandchildren, six great grandchildren and one great-great grandchild are left to mourn his passing. Visitation with family members will begin at 12 p.m., Tuesday, August 1, 2017 at the Elm Street Church of Christ in Lynchburg. A funeral service will follow at 2 p.m. officiated by Bro. Chris Whitaker. Interment will be at Highview Cemetery in Lynchburg, Tennessee.

The family of Evangelist Waggoner Jr created this Life Tributes page to make it easy to share your memories.

Send flowers to the Waggoner family.