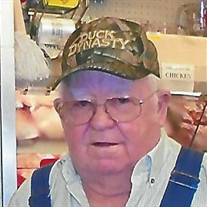 Mr. Harold “Dump” Fulton Smith, 85, passed away on February 24, 2016 at Harton Regional Medical Center in Tullahoma, TN. Born on April 5, 1930 in Bedford County, TN, he was the son of the late William Fulton and Jessie Lee Eslick Smith. A member of the Lois Church of Christ, “Dump” will always be remembered as a prankster, a great conversationalist, storyteller and a man that loved to fish and hunt fox. At one time he was the handler of Queen, a State Champion Fox hunting dog. Prior to retiring Mr. Smith held a variety of occupations including farming, carpentry, school bus driver and heavy equipment operator. Mr. Smith was also preceded in death by his wife Sarah C. Pierce Smith along with a sister Virgie Lee Askins and brother Bobby Smith. He is survived by daughters Betty (Terry) Evans of Lois, TN and Synthia (Larry) Ray of Lynchburg. One sister Dottie Marie “Toots” (Clyde) Fanning of Lynchburg, TN survives. Also surviving are grandchildren Michael, Lory, Sara, Amanda and Jeremy along with 10 great grandchildren and Cohl, a great-great grandchild. Visitation with family members will be held Friday evening, February 26, 2016 beginning at 5 p.m. at Lynchburg Funeral Home. Funeral service will be at 11 a.m. Saturday, February 27, 2016 at the Lois Church of Christ. Interment will follow at Lois Cemetery. In lieu of flowers donations can be made to the Multi County Cancer Support Network, 110 East Lauderdale Street, Tullahoma, TN 37388.

The family of Mr. Harold "Dump" Fulton Smith created this Life Tributes page to make it easy to share your memories.