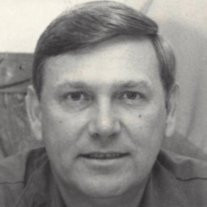 Colonel James Madison Walker of Shelbyville passed away on December 29, 2013, at the age of 77. Born in rural Lincoln County, Colonel “Big Jim” Walker rose to prominence as a highly decorated Army combat veteran, helicopter pilot, avid hunter, outdoorsman, and owner of the Quail Valley Hunt Club in Petersburg, Tennessee. A 1959 Graduate of the University of Tennessee, Colonel Walker served on active duty in the United States Army from August 1959 until October 1981. He loved his Country and he loved the Army. He commanded soldiers at every level from platoon to brigade. He served as a combat helicopter pilot for three years during the Vietnam War and received many awards and decorations for heroism, gallantry, and high achievement in aerial combat operations against a hostile enemy. In addition to being a Master Army Aviator, "The Colonel" was also a tough as nails Army Airborne Ranger. A lifelong hunter, Colonel Walker owned and operated the Quail Valley Hunt Club in Petersburg for over 25 years. He chose to open the hunting club just a few years after his retirement from the Army, and after a successful stint as an army aviation consultant. Big Jim shared his passion for bird hunting with thousands of hunters from every skill level. Hunters came from around the country to bird hunt at Quail Valley, but more importantly, they came just to spend time and make friends with the legendary “Big Jim” Walker. “Big Jim” Walker lived large, loved life, and loved people. He was an American original and truly one of a kind. He had thousands of friends and friendships that he loved and cherished very much, but his proudest accomplishment was his family. He was preceded in death by his father, James Edwin Walker, and his mother, Clara Estelle Edde Walker. He is survived by a sister, Linda Thompson, and a brother, Charles Michael Walker. He is also survived by his wife of over 58 years, Jane Gillum Walker, and three sons and daughter-in-laws, Lieutenant Colonel (Retired) James Madison Walker, Jr. and Niki Styles Walker; Robert Carl Walker and Dr. Laura Cox; and Joseph Mark Walker and Teresa Beard Walker. He is survived by ten grandchildren: Amanda Walker Durham, Dr. Sarah Walker Metelka, Jessica Leigh Walker, Emily Jane Walker, James Madison Walker III, Claire Edde Walker, Samuel Joseph Walker, Rachel Marie Walker, James Clay Walker, and Benjamin Matthew Walker. He is also survived by two great-grandchildren: Amelia Grace Durham and Hanna Claire Durham. Visitation for Colonel Walker will be from 3pm-7pm on Sunday, January 5, 2014, at The Lynchburg Funeral Home, located at 1630 Fayetteville Highway, Lynchburg, Tennessee. Funeral Services will begin at 9:30am on Monday, January 6, 2014, at The Lynchburg Funeral Home. An Interment Service will begin at 2pm at the Middle Tennessee Veterans Cemetery located at 7931 McCrory Lane in Nashville. In lieu of flowers, the family requests donations be made to either the Sarah Cannon Fund, 310 25th Avenue North, Suite 103, Nashville, TN 37203, or the Army Aviation Association of America Scholarship Foundation, Inc., 593 Main Street, Monroe, CT 06468.

The family of James Madison Walker created this Life Tributes page to make it easy to share your memories.

Colonel James Madison Walker of Shelbyville passed away on December...

Send flowers to the Walker family.