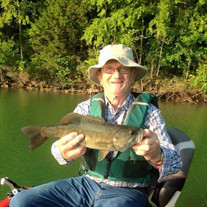 Mr. Joe Patrick Smith, 70, passed away at his Lynchburg residence on April 19, 2016. Mr. Smith was born in Lincoln County, Tennessee to the late Madison and Irene Patrick Smith. A Baptist by faith, Mr. Smith loved to hunt and fish, make conversation and be with his grand and great grandchildren. Prior to retiring Mr. Smith was associated with Tyson Foods as a maintenance technician. He is survived by his wife of 52 years Johnnie Faye Smith along with his daughter Sherry Smith Heflin and her husband Joel of Shelbyville and son Bill Smith and his wife Christy of Lynchburg. Also surviving are brothers Ronnie Smith and his wife Nyla of Manchester, Bobby Smith of Lynchburg and Gary Smith of Fayetteville. Surviving sisters include Darlene Woods and her husband Johnny of Lynchburg, Faye White and her husband Jack of Mississippi, Martha Cuffel and her husband Terry of Florida along with Catherine Nelson, Marie Todd and Nancy Floyd all of Alabama. Matthew Smith, Nichole Smith, Beth Douglas, Joey Heflin, Jess Smith and Cassie Smith are surviving grandchildren along with great grandchildren Cameron Smith, Peyton Smith and Jana Douglas. Also surviving are several nieces and nephews. Along with his parents, also preceding Mr. Smith in death were brothers Clyde Ray Smith, Eddie Dean Smith, Eugene Smith, Jerry Smith and Donnie Smith. Visitation will be held at Lynchburg Funeral Home on Thursday, April 21, 2016 from 5 p.m. until 8 p.m. A funeral service will be held Friday at 2 p.m. in the Lynchburg Funeral Home Chapel. Burial will follow in the Pleasant Hill Cemetery in Moore County. Bro Mickey Winter will officiate. In lieu of flowers donations may be made to the Mid South Alzheimer’s Chapter, 4825 Trousdale Dr., Ste 220, Nashville, TN 37220

The family of Mr. Joe Patrick Smith created this Life Tributes page to make it easy to share your memories.

Mr. Joe Patrick Smith, 70, passed away at his Lynchburg residence...