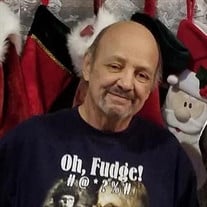 Joseph Frank, age 73, of Fayetteville, TN earned his wings Saturday, January 8, 2022. He was born August 15, 1948 in Taunton, Massachusetts to the late Francisco and Nora Frank. In addition to his parents he is also preceded in death by his... View Obituary & Service Information

The family of Joseph Frank created this Life Tributes page to make it easy to share your memories.

Send flowers to the Frank family.