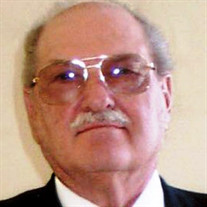 Kent Roger Gamble, 80, of Belvidere, TN., departed this life on Wednesday, January 30, 2019 at his residence. Funeral Services are scheduled for 2 PM Sunday, February 3, 2019 at Hickory Grove Baptist Church, 1557 Hickory Grove Road, Huntland, TN 37345 with Bro. Chris King and Dr. Bob Hill officiating. Interment will follow at Mt. Carmel Cemetery in Huntland. Visitation with the family will be at the church on Saturday, February 2, 2019 from 5 -8 PM. Mr. Gamble was born in Huntland, TN on October 17, 1938 to the late J. W. Gamble and the late Oseline Kennedy Gamble. He graduated from Huntland High School in 1955 where he played football under the coaching of the late Shirley Majors. Mr. Gamble was a lifetime member of Hickory Grove Baptist Church and served as Chairman of the Deacons for many years. He taught the Men’s Sunday School Class and previously the Wednesday Night Bible Study. He was the oldest surviving member. Mr. Gamble was presently the owner of J. W. Gamble and Son, General Contractors. He and his father began their business in 1961, and it continues today, with his son, Ricky. He was known for the excellent quality of his workmanship and has built many commercial buildings and residential houses in Franklin County. He also enjoyed working on his farm and working his registered Charolais cattle. He will be remembered for his dedication to his family and his church. In addition to his parents, he was preceded in death by his sister, Patricia Ann Gamble. He is survived by his wife of 63 years, Bettye Soloman Gamble; sons, Ricky (Tammy) Gamble and Jeff (Sheri) Gamble, both of Belvidere; daughter, Pamela (Glen) Grant of Belvidere; four grandchildren, Adam (Jenny) Gamble of Murfreesboro, Rachel (Travis) Crossland of Belvidere, Wesley (Stacey) Gamble of Winchester, and Whitney (Timmy) Parks of Belvidere; three step-grandsons and three great grandchildren, Chloe, Matthew and Katy. Memorial Donations may be made in his honor to St. Jude Children’s Research Hospital, 501 St. Jude Place, Memphis, TN. 38105. Online condolences may be made at www.lynchburgfuneralhome.com. Lynchburg Funeral Home is in charge of arrangements.

The family of Kent Roger Gamble created this Life Tributes page to make it easy to share your memories.

Send flowers to the Gamble family.