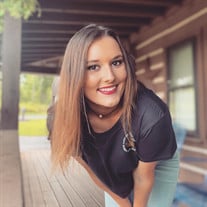 Kyleigh Rhea Camp of Lynchburg, TN went to be with her heavenly father Sunday, March 14, 2021 at the age of 23. The family will welcome friends for visitation on Thursday, March 18 from 4pm until 7pm at Lynchburg Funeral Home. The funeral service will take place on Friday, March 19 at 11am, at Lynchburg Funeral Home with Pastor A.J. Alderman officiating. Pallbearers will include: Jordan Hopkins, Tyler Prater, Neil Greenway, Derek Greenway, Cameron Greenway, Cale Greenway, Dalton Barrier. Honorary Pallbearers to include: Jackson Greenway and Cooper Dickey. Kyleigh was born on July 9, 1997 to David and Anita Greenway Camp. Her personality was larger than life. She kept her family and friends on their toes with her honesty and humor. Her family meant the world to her and she spent time with them every moment she could. To her friends, she was known for her heart of gold and her love of laughter. Above all, she loved her Lord Jesus Christ with all her heart. She was a member of Pleasant Hill United Methodist Church and loved animals, especially her dogs. Throughout her years at Moore County High School, Kyleigh played softball and won many awards. Her passion for softball never subsided and she continued to play recreational softball after she left high school. She also loved being out on the lake, kayaking, and skiing. She was employed at Jack Daniels and recently found out she was going to be an Aunt. She was so thrilled about the upcoming arrival of her first niece or nephew, that she told everyone she came in contact with about the news. Kyleigh was preceded in death by her great grandparents, Georgia Leta Bobo and Mamie Yates; grandparents, Thomas Greenway, Hershel Camp, Patricia Bobo Camp. Along with her parents, she is survived by her grandmother, Wanda “Katie” Greenway of Lynchburg; sister, Kelsey Hopkins (Jordan) of Winchester; uncle/ Godfather, Anthony Camp; aunt/ Godmother, Susan Camp; uncles, Davis Greenway (Sheree), Dan Greenway (Kim), Bruce Greenway; special cousin/ honorary sister, Amanda Dickey (Chris) of Lynchburg; and a host of cousins and friends. In lieu of flowers, the family requests that donations be made to the Moore County High School Softball Program.

Kyleigh Rhea Camp of Lynchburg, TN went to be with her heavenly father Sunday, March 14, 2021 at the age of 23. The family will welcome friends for visitation on Thursday, March 18 from 4pm until 7pm at Lynchburg Funeral Home. The funeral service... View Obituary & Service Information

The family of Kyleigh Rhea Camp created this Life Tributes page to make it easy to share your memories.

Kyleigh Rhea Camp of Lynchburg, TN went to be with her heavenly...

Send flowers to the Camp family.