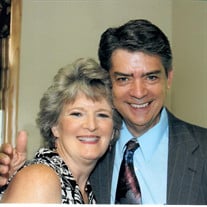 Funeral Services for Mr. Leo Bruce Bechard, age 68, will be conducted Wednesday afternoon at 3:00 o’clock PM in the chapel of Lynchburg Funeral Home with Brother Shawn Clark officiating. The Bechard family will receive friends at Lynchburg Funeral Home from 11:00 o’ clock AM until time for the service. A native of New Hampshire, Leo was the son of the late Maurice Bechard and Olivette Paquette Bechard who survives. He was a retired Postal Supervisor for the United States Postal Service, the minister of the County Line Church of Christ in Lynchburg, an employee of Lynchburg Funeral Home and a veteran of the United States Air Force. Leo traveled the world doing mission work for the Church of Christ, enjoyed hockey and shooting his guns and especially loved his family and family time. In addition to his father, Mr. Bechard is preceded in death by brothers, Daniel and Robert Bechard Leo is survived by his wife, Anita Bechard of Lynchburg, his mother, Olivette Bechard of Lavergne, children, Jason Bechard and wife Jessica of Old Hickory, TN, Chad Bechard and wife Holly of Carlsbad, California, and Kelly Bechard of Apple Valley, Minnesota, sisters, Mona Bouthillier of White River Junction, VT and Laura Ducas and husband Conrad of Milford, NH, brothers, Rodney Bechard and wife Toni of Nashville, and Albert Bechard of Lavergne and grandchildren, Ally and Burton Bechard. In Lieu of Flowers Donations may be made to Camp JOY, P O Box 8192, Lynchburg, TN 37352 For online guest registry please visit www.lynchburgfuneralhome.com.

The family of Leo Bruce Bechard created this Life Tributes page to make it easy to share your memories.

Send flowers to the Bechard family.