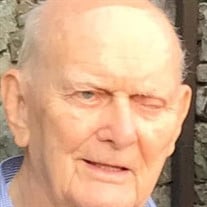 Milton David James Reese of Lynchburg, Tn. passed this life at the V.A. Medical Center at the age of 85. A native of Moore County, Tn. he was the son of the late Lee P. and Dora Philpot Reese. Funeral services will be held at Lynchburg Funeral Home on Wednesday Jan. 29, 2020 at 11 am. Ministers will be Steven Hovator and Gary Johnson of the Cedar Lane Church of Christ. Burial will follow in the Lynchburg Cemetery. Visitation will be Tuesday Jan. 28, 2020 from 4 to 8 pm at Lynchburg Funeral Home. Pallbearers will be: Derrick, Daniel and Darin Reese, Lucas Green, Craig Whitney and Jason Foster. In Lieu of flowers, please make a donation to the Cedar Lane Church of Christ or a charity of your choice. Milton was a graduate of Moore County High School. He entered the United States Air Force in 1954. He served in the 137 Aircraft Control and Warning Squadron in Korea. He had top-secret clearance and left the service as Staff Sgt. He served six years in the Air Force Reserve after his four years of active duty. Milton enjoyed fishing, watching football, was a part-time farmer and was very proud of the fact that he was a member of the 1952 Moore County Football team that won the Duck River Valley Championship. Upon his return to civilian life, Milton went to work with Davis and Stone Plumbing in Tullahoma. While working there he earned his Master Plumbing License, Electrical License and Building License. He formed Reese’s Plumbing, Electric and Heating Company. This company is now owned by his two grandsons. He was employed by Jack Daniel Distillery as Building and Maintenance Manager. After twelve years with Jack Daniel, he was employed by Colonial Corporation of America as a Building and Maintenance Manager. During his employment with this company, he traveled throughout four countries and four states. Milton retired after sixteen years with Colonial. After retirement he did special projects for Kenall Corporation of Ardmore, Alabama. In addition, Milton was the overseer of building a Church of Christ in Bucharest, Romania and was building representative for the Church of Christ at Cedar Lane in Tullahoma, Tn. where he was a longtime member. In addition to his parents, Mr. Reese was preceded in death by one brother: Ralph D. Reese. He is survived by his wife, Rayma Reese, sons: Ron and wife Carol, Garry, Chris and wife Connie, Jim and wife Nancy. He is also survived by 9 grandchildren including Nicole (Lucas) Green, Katie Reese, Amanda (Craig) Whitney, Cydney Reese, Corey (Jason) Foster, Noah Snell, Derrick (Cortney) Reese, Daniel (Brandi) Reese, Darin (Monica) Reese and fourteen great-grandchildren, two sisters: Mary C. Metcalf, Peggy Ward and husband Bill. Others survivors are Cindy (Bud) Stovall, Danny (Carole) Millsaps, three step-granddaughters and one step-great-granddaughter. He continued his friendship from service days with special friends Ralph and Janice of Florida and Bob and Barbara Carney of Louisiana who also survive.

Milton David James Reese of Lynchburg, Tn. passed this life at the V.A. Medical Center at the age of 85. A native of Moore County, Tn. he was the son of the late Lee P. and Dora Philpot Reese. Funeral services will be held at Lynchburg Funeral... View Obituary & Service Information

The family of Milton Reese created this Life Tributes page to make it easy to share your memories.

Send flowers to the Reese family.