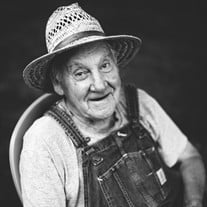 Ralph Wayne Kennemer of Smith Chapel in Moore County, passed from this life on November 6, 2019 at the age of 87. He passed peacefully after a courageous battle with cancer surrounded by family. Even though he will be greatly missed, the family rejoices in knowing he is in the presence of God for eternity and no longer feels any pain. Ralph lived a very blessed and loving life. He was born to the late Leonard and Myrtle (Austin) Kennemer of Moore County on September 30, 1932. He married his best friend and the love of his life, Donna Deanne (Mullins) Kennemer, at the age of 26 on February 12, 1959. The two grew up knowing each other from childhood. While in the nursing home he grasped her hand and told her he loved her today as much as he did when they first met. Together they were blessed with two sons, Terry Lynn Kennemer (wife Patsy (Baker) Kennemer) and Timothy Wayne Kennemer (wife Angela (Grogan) Kennemer) all of Moore County. The two attended Smith Chapel Methodist Church. Ralph served for the United States Army and was placed on active service in Korea on April 30, 1953. He was discharged from active duty April 26, 1955 as a Corporal in Camp Chaffee, Arkansas. He supervised the leather finishing department for many years at Tennessee Tanning Company before retiring in 1995. In retirement, he spent most of his days loving on his granddaughters, Stacy Lynn (Kennemer) Preston (husband Bret Preston), Kristie Deanne (Kennemer) Johnson (husband Ryan Johnson), Holly Dawn (Kennemer) Bearden (husband Drew Bearden), Meacy Lane Kennemer and Katie Ann Kennemer, and two great-grandsons, Lucas Wayde Preston and Jacob Gowen Preston. Visitation and funeral services will be held at Lynchburg Funeral Home on Friday, November 8, 2019 with visitation starting at 11:30 a.m. with funeral to follow at 1:00 p.m. Burial will follow services at Smith Chapel Cemetery. Funeral arrangements by Lynchburg Funeral Home, 1630 Fayetteville Highway, Lynchburg, TN.

Ralph Wayne Kennemer of Smith Chapel in Moore County, passed from this life on November 6, 2019 at the age of 87. He passed peacefully after a courageous battle with cancer surrounded by family. Even though he will be greatly missed, the family... View Obituary & Service Information

The family of Ralph Wayne Kennemer created this Life Tributes page to make it easy to share your memories.

Send flowers to the Kennemer family.