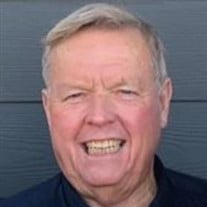 Steven Barry Tudor was born on April 29, 1953, and died on July 7, 2021. He is survived by his wife Cathy, nee Estep, daughter Amy, son Steven, daughter-in-law Jamie, granddaughters Atley Grace, Ava Claire, and Amelia Jean, brother Terry Tudor, sister Cathy Tudor Forester, niece Hayley Forester, cousins Peggie Wells, Martha Waid Nichols, and Beth Bell (David) Arnold. He is preceded in death by his father Billy Joe Tudor and his mother Gladys Bolles Tudor. Steve and Cathy met at MTSU as members of the celebrated Sacred Harp Singers and were married at Inglewood Baptist Church in Nashville on July 28, 1978. They were a ministry team through music their entire marriage. After Cathy was critically injured in a car accident in 2019, Steve was a passionate and tireless caretaker throughout her recovery and rehabilitation. Steve never met a stranger, and never hesitated to go out of his way to help someone in need. Many people have a story about a time Steve’s generosity and expertise made the difference during a hard time, and being able to help people brought him great joy. Steve dedicated his life to serving others as a pastor, youth pastor, and music director. He was blessed with a spectacular voice, and he loved to share his gift through his ministry, leading the congregation in hymns, directing the choir, and through many solos and duets with Cathy. Outside of church was no different, and no holiday or family gathering was complete without Big Steve leading everyone in a few songs. Bringing people to the Lord was his greatest priority in life, and he carried a worshipful heart with him everywhere he went. He coached his children in football, soccer, and baseball as soon as they were old enough to join a team, and continued his enthusiastic support through Amy’s college playing and softball coaching career, rarely missing a game within driving distance. When she led her team to the 2021 NCAA Regional Championships in Athens, GA, their biggest fan was in attendance. “It was the most fun I’ve had in a long time,” he said of the tournament. “I loved it.” The greatest pride in Steve’s life was his three granddaughters, who will remember their Pops beaming with encouragement and love and making a joyful noise unto the Lord. Visitation is 1:15-3:00; funeral service at 3:00 at the Petersburg Cumberland Presbyterian Church. Burial will follow at Old Orchard Cemetery, Petersburg. In lieu of flowers, donations may be made to Cathy Tudor’s relief fund to help her get back on her feet. https://gofund.me/71abacbc

The family of Steven Barry Tudor created this Life Tributes page to make it easy to share your memories.

Send flowers to the Tudor family.