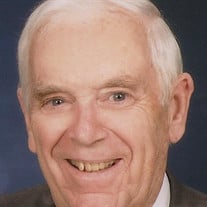 Scheerer, William L (Bill)- 82 of Fayetteville, Tennessee passed away at Donaldson Nursing Home in Fayetteville, Tennessee. Funeral service will be Saturday February 22, 2020 at 1 pm at Prospect Baptist Church, on 32 East Prospect Road, Fayetteville, Tennessee with Brother Ronnie Gay officiating. Visitation will be Saturday February 22, 2020 from 11 am to 1 pm at Prospect Baptist Church. Bill was born April 18, 1937 in Indianapolis, Indiana to the late William and Elizabeth Scheerer. Bill served in the United States Army and left with an honorable discharge. A salesman at heart, Bill eventually started his own company, Quick Filter Manufacturing. Along with his wife Nancy, they built a successful business that lasted until his retirement in 1988. In his retirement he continued to dabble in several small business ventures. Once again Nancy joined him as they sold Amish wood products, candied nuts, pretzels, jams and jellies. Even though he was retired, the couple continued to work together as a team. He was a member of the Prospect Baptist Church, Bill enjoyed his Bible study class and many friends, always joking around with anyone in earshot. He was a loving and devoted husband, father, and grandfather who freely gave of his time, making sure everyone else was enjoying life. Bill is survived by his wife, Nancy of 59 years, a sister, Suzy Waddell, children William (Bill) and wife Nikki Scheerer of Jacksonville, Florida and Beth Pigg of Fayetteville, Tennessee: Grandchildren Kyler Scheerer, Kimberlee Kinney and Zoie Scheerer. In lieu of flowers, the family requests donations be made in Bill’s memory to the Prospect Baptist Church at 32 East Prospect Road Fayetteville, Tennessee 37334. The family would like to thank Lincoln Hospice care for their loving care of our Husband and Dad.